Alberta, in Western Canada, is a nature lover’s dream destination. It is home to Banff National Park, Canada’s first national park and the world’s third oldest national park. Without a doubt, it is one of the most beautiful places in the world. Many people associate Alberta with Banff and the Rocky Mountains, but the mountains are just one piece of a province that is filled with spectacular landscapes. There’s natural beauty to be found in the mountain landscapes, grasslands, prairies, lakes, boreal forest and desert badlands. So, where should you go first? Here are 10 of the most beautiful and best national parks and provincial parks to visit in Alberta.

This post may contain affiliate links. That means that I may earn a small commission, at no extra cost to you, if you buy something through my site. This helps me run my website and produce the articles that I hope you find helpful.

If you have the time to explore more, or are curious about all of Alberta’s most beautiful places to visit, take a look at this wonderful book, 200 Nature Hot Spots in Alberta by Leigh McAdam and Debbie Olsen. 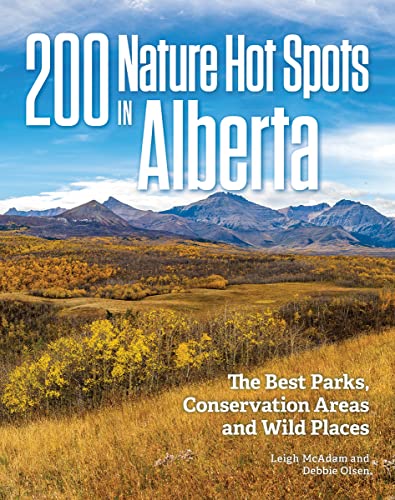 As you will see, Alberta is packed with some of the best national parks and provincial parks in the world. Truth be told, it would take months to fully appreciate and explore them all.

For other amazing national and provincial parks, and outdoor destinations to visit in the United States and Europe, please see:

Best Provincial Parks And National Parks To Visit In Alberta

Here are 10 of the most beautiful and best provincial and national parks in Alberta. I have highlighted the best things to do, including fantastic hikes, spectacular scenic look outs, wildlife viewing, and water sports on the lakes.

It is one of the most beautiful places on the planet and home to Banff Upper Hot Springs, the natural hot springs that inspired the creation of the Park. The Park is filled with stunning waterfalls, lakes, streams, and mountains, but one of the prettiest spots is Moraine Lake.

Situated in the Valley of the Ten Peaks, this glacially fed lake is one of the most photographed sites in the Canadian Rockies. It’s sometimes called “the lake with the twenty-dollar view,” because an image of Moraine Lake was on the 1969 and 1979 issues of the Canadian $20 bill.

You can rent a canoe and go for a paddle or hike on beautiful trails in this area of Banff National Park. The Larch Valley is accessed from Moraine Lake. It is a spectacular hike in September when larch trees turn yellow and its needles begin to drop.

The three major scenic highlights in the Park are Maligne Lake, Maligne Canyon and Medicine Lake. Maligne Lake is the largest natural lake in the Canadian Rockies. You can rent canoes at the lake and enjoy a peaceful paddle. Alternatively, Brewster Travel Canada offers a 90-minute boat cruise that will take you to Spirit Island, one of the most photographed views in the Rockies.

Maligne Canyon is another scenic highlight of this area. Hikers can follow a 4.4 km (2.73 miles) (return) pathway that winds along the canyon edge over six bridges to spectacular viewpoints.

Medicine Lake is another must-see in Jasper National Park. It is also known as the disappearing lake. A unique drainage system causes the water level to fluctuate dramatically from season to season – sometimes disappearing altogether.

There are several wonderful hikes that depart from or traverse the Maligne Valley including the Opal Hills Loop, the Bald Hills trail and the iconic Skyline Trail, one of the premiere backpacking trails in the Canadian Rockies.

This park in Kananaskis Country is an incredibly popular destination with locals and travellers alike. Peter Lougheed Provincial Park is located near British Columbia and the Great Divide in the front ranges of the Rocky Mountains. The scenery is glorious and a wide array of wildlife species can be found in the park. You might see mule deer, white-tailed deer, elk, moose, bighorn sheep, mountain goats, grizzly bears, black bears, cougar, wolf, wolverine, lynx, and coyote as well as smaller mammals typical of alpine and sub-alpine habitats.

Peter Lougheed Provincial Park is also home to the William Watson Lodge, which provides year-round accessible wilderness lodging for people with disabilities and seniors. In addition, it is surrounded by accessible trails.

William A. Switzer Provincial Park is about an hour’s drive northeast of Jasper National Park, in the foothills of the Northern Rockies. Like the nearby National Park, it has beautiful scenery, numerous recreational opportunities and abundant wildlife within its 63 square kilometres (24 square miles).

There are five lakes in William A Switzer Provincial Park and they are connected by a navigable creek. The Jarvis Creek Interpretive Canoe Route is one of the few interpretive paddling trails in the province. Interpretive signs on the route can be viewed from the water.

There are many interesting hiking trails in Switzer. Athabasca Lookout is a short and steep one-kilometre (0.6 miles) hike that leads to the best viewpoint in the Park.

At 505 square km (194 square miles), Waterton Lakes National Park is the smallest of the Canadian Rocky Mountain National Parks, but it’s also one of the most diverse parks in parks Canada. Located in a region known as the Crown of the Continent, this Park contains beautiful scenery and a vast array of flora and fauna.

In 1932, Waterton Lakes National Park combined with Glacier National Park in Montana to become part of the Waterton Glacier International Peace Park, the world’s first International peace park. It is a symbol of peace and goodwill between Canada and the United States, and a Unesco World Heritage Site. You can take a 2-hour cruise from the Canadian side of Upper Waterton Lake to the American side of the lake.

There are many wonderful hikes in Waterton Lakes National Park, but the Crypt Lake Hike is one of the most spectacular. This unique hike features a 15-minute boat ride across Upper Waterton Lake to the trailhead at Crypt Landing. You’ll pass four waterfalls, climb a steel ladder, crawl through an 18-metre tunnel and maneuver around a cliff using a steel cable before you arrive at beautiful Crypt Lake.

Tucked away in the southeast corner of Alberta, near the Montana border, this special spot contains the largest collection of rock art on the North American Plains. It dates back thousands of years and is a Unesco World Heritage Site.

Historians believe First Nations people created rock art to depict historical events like hunts and battles and important life events like vision quests. But according to Blackfoot legend, the rock art at Writing-on-Stone Provincial Park comes from the spirit world. Furthermore, it is a place to which they still return for spiritual guidance.

Writing-on-Stone Provincial Park also has fascinating hoodoos. A hoodoo is a tall, spindly structure that forms within sedimentary rock and protrudes from the bottom of an arid drainage basin or badland.

The Milk River flows through the Park and visitors can paddle a canoe or relax at a small sandy beach near the river’s edge.

The campground in the Provincial Park is equipped with RV and tent sites as well as comfort camping facilities that include semi-permanent shelters with private decks and comfortable beds.

The landscape of the Canadian Badlands is stunningly beautiful. It played a part in the decision to make Dinosaur Provincial Park a UNESCO World Heritage Site.

When you’re in the middle of the lunar-like landscape, it’s hard to imagine this place as a subtropical paradise, but millions of years ago, this Park was filled with palm trees and ferns. Dinosaurs roamed here on the edge of a great inland sea. There were so many dinosaurs that this spot contains the highest concentration of late Cretaceous Period fossils in the world. Many fossils still lie waiting to be uncovered.

Dinosaur Provincial Park has incredible interpretive programs that teach visitors about dinosaurs, show them how to identify fossils and even provide opportunities to excavate fossils with real scientists. There are guided badlands hikes and interpretive theatre programs.

At nearly 1,200 square km (300,000 acres), Lesser Slave Lake is Alberta’s third largest lake. It is rimmed by some of the finest beaches in the entire province.

It’s estimated that up to 20 percent of the western population of tundra swans stops to feed on the lake. Flocks of up to 3,500 swans have been documented in the spring and fall.

Reeds around the lake provide nesting habitat for a globally important western grebe population. The area also has an incredible concentration and diversity of migrant songbirds, including yellow warbler, bay-breasted warbler and red-eyed vireo to name a few.

Visitors with a particular interest in songbirds should hike the Songbird Trail or attend the Songbird Festival, held in this Alberta Provincial park each spring.

Sir Winston Churchill Provincial Park is Alberta’s only island park. It is located on a large island in the 236 square km (58,000 acres) lake known as Lac la Biche.

There’s a campground and cabins on the island as well as a playground, beaches and other facilities. Located at the east end of Lac la Biche, the island is accessed by a 2.5 km-long (1.5 miles) causeway making it one of the most unique campgrounds in the province. Alberta Parks has tipis, equipped cabins, and campgrounds that can accommodate visitors to this lovely park.

Birding is one of the most popular activities in Sir Winston Churchill Provincial Park. In addition, Lac La Biche has been designated an Important Bird Area.

The island is criss-crossed with hiking trails that pass through old growth forest that has been untouched by forest fires for at least 300 years.

Wood Buffalo National Park was declared a UNESCO World Heritage Site in 1983 in part for the biological diversity of the Peace-Athabasca Delta, one of the world’s largest freshwater deltas. Included in the many ecosystems within the Park are some of the largest undisturbed grass and sedge meadows left in North America.

The world’s largest herd of free-roaming wood bison are found here. Most interestingly, it’s the only place in the world where the predator-prey relationship between wolves and bison has continued, unbroken, to this day.

Wood Buffalo National Park is remote, wild and difficult to reach. It is also the world’s largest dark sky preserves. The annual Dark Sky Festival in mid-August is a good time to visit if you’re interested in stargazing.

Alberta is blessed with a fantastic array of natural beauty that is waiting to welcome the avid explorer or weekend adventurer. Without leaving the province, you can find all kinds of beautiful landscapes, such as mountains, grasslands, prairies, lakes, boreal forest and desert badlands. Some are even just a couple of hours drive away from each other. If you are looking for your next outdoor adventure and wish to remain in North America, head to Alberta and be amazed at what you will find.

Debbie Olsen is the author of this article. She is an award-winning writer and photographer and a national bestselling author. She is also the co-author of the new book, “200 Nature Hot Spots in Alberta.” Follow her at www.wanderwoman.ca.

Sign up for free authentic adventure travel tips and itineraries

Where Should You Stay? Explore here!

We are a participant in the Amazon Services LLC Associates Program, an affiliate advertising program designed to provide a means for sites to earn advertising fees by advertising and linking to Amazon.com. As an Amazon associate, we earn from qualifying purchases.

Enter your name and best e-mail address to get your FREE planning guide.

Oops! We could not locate your form.

Enjoy your planning guide! Plus, I’ll send you regular travel tips and planning tools and to help you discover the world in a different way